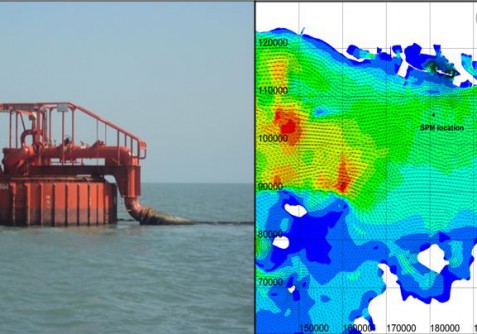 HPCL – Mittal Pipelines Limited (HMPL) has setup an offshore Single Point Mooring (SPM) import terminal and associated submarine pipeline system in Mundra Port waters, Gujarat in the year 2010 to receive crude for their refinery at Bathinda, Punjab. The SPM was located around 10km from LFP when installed. However, Mundra port has dredged the area between the SPM and the land fall point and has reclaimed approximately 3 km land for development of their south port. HMPL perceives that the change in shoreline would have changed the met-ocean parameters including hydrodynamics around the SPM location. In this regard, L&T Infra Engineering was assigned to be their owner’s representatives to carry out survey supervision, analyse the measured meteorological and oceanographic data collected for a period of one year and also to carry out the met-ocean investigations through mathematical model studies using the collected data at the SPM location for the design improvement of the same. The objectives of the study are as follows