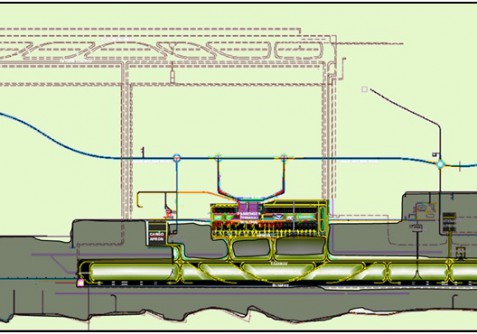 Hyderabad International Airport Ltd., a JV Company formed by GMR group and Malaysia Airports Holding Berhad, Government of Andhra Pradesh and AAI was awarded a PPP project to develop a State-of-the Art Greenfield international airport at Shamshabad, Hyderabad by the Government of Andhra Pradesh. The initial capacity of the airport is 12 million PAX and in the ultimate stage it should be capable of handling 40 million PAX. The airport is capable of receiving A380 aircraft even in the initial stage.
The major civil engineering ‘design and build’ contract was awarded to L&T ECC who in turn engaged L&T Infra Engineering for the detailed design and production of construction drawings of all the civil works except the terminal and other buildings. The airport successfully commenced commercial operations in March 2008.