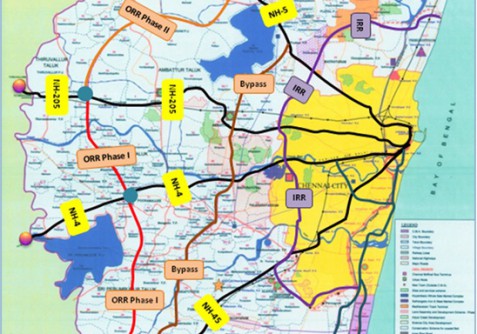 Chennai Metropolitan Development Authority (CMDA), as a part of its Master Plan has proposed development of Outer Ring Road (ORR) along the periphery of Chennai Metropolitan Area (CMA) in Kanchipuram and Tiruvallur Districts with an objective of relieving congestion within the city and also for catalysing the even dispersal of urban growth.

ORR will provide orbital linkages to the major radial roads and decongest the traffic flow on the existing Inner Ring Road (IRR) as well as disperse urban growth over a large area. ORR is planned as Road-cum-area development facility. Development of ORR would spur development of well-planned and well-connected urban settlements in the outer CMA besides strengthening the orbital road network. To cope with the mobility and accessibility requirements of the induced developments on either side of it, the ORR Project has been configured as a multi-modal corridor with a rail based transit alignment proposed in the middle of the transport corridor.