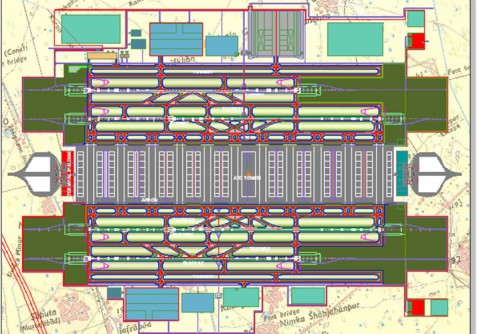 The National Capital Territory in and around Delhi is the fastest growing region in the country and it is realized that the existing airport facilities in the region have limited scope for expansion and will soon become inadequate.  At least one more Greenfield international airport will be required very soon. Government of Uttar Pradesh (GoUP) took the initiative to develop such a facility at Jewar in Greater NOIDA.

GoUP appointed L&T Infra Engineering led consortium in 2002 to prepare the TEFR and bidding documents for PPP format which was completed in 2004. However, due to various reasons the project could not be taken up. In the light of the recent sudden boom in the aviation sector, GoUP wanted to revive the project. Accordingly, L&T Infra Engineering was given the assignment to revise and upgrade the earlier documents.

However, this turned out to be a fresh study due to major changes in air traffic in the mean time.

The revision envisages passenger traffic up to 104 million per annum and cargo of 2.5 million tonnes in the ultimate stage. The Master Plan has been prepared on this basis.